Fall Is Too Early!!!

I love the change of the seasons.  Don't get me wrong - Fall is probably one of my favorite seasons.  But where I live we don't usually experience Fall weather until around mid-late October.  As soon as September hit we've had most days in the mid-70s and today its only 62 degrees.  I'm not ready for this.  My garden isn't either.  This is prime pepper time here and if it gets too cold I won't get near the bounty.

Also, we live in a city that provides leaf pick up.  But it doesn't start until Mid-October.  There are very strict laws here that don't allow leaf burning or putting them in the garbage.  They get picked up and brought to a communal mulch pile.   Leaves are falling already and we can't do anything with them.

On the plus side I was able to harvest 3 pumpkins from my garden this year.  I hope they don't rot before Halloween!!

The LoML has been traveling a lot for work so I've been doing some cooking.  Earlier this week I saw a Jamie Oliver show about eating more veggies and he made a Cauliflower Cheese Pizza.  I had half a giant cauliflower in the fridge so decided to give it a try.  So yummy! 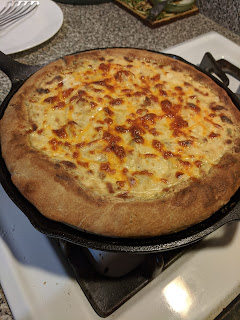 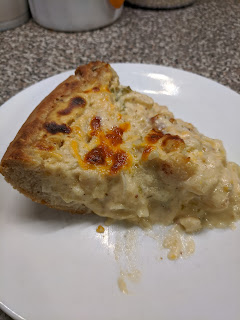 Last week LoML hit the farm stand for some veggies and he picked up a yellow watermelon, a bunch of bananas and a huge bag of gorgeous blueberries.  The LoML is not a big fruit eater so I'm not sure what he was thinking.  No way I could eat all of that before it went bad. So I cut up half of the watermelon and gave the other half to my kids to take home.  Then today I made a blueberry banana bread. 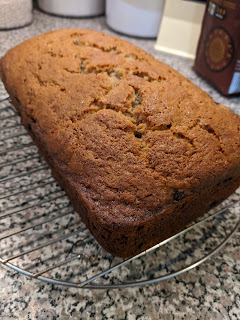 It smells fantastic.  That will be our treat for the week.

In financial news, I am really trying to figure out how to get this house paid off as fast as possible so I can retire.  This job is killing me and I really don't want to do it for another 3 years.  So today I bit the bullet and we applied to refinance.  My interest rate will drop more that 1%, though I will have to pay around $3,500 in fees.  My monthly payment will drop by around $240 which I will add right back to the the extra principle I'm already paying to get this sucker gone.

Well that is all I have for today.  I hope your September is going well!!

Fall Is Too Early!!!

I love the change of the seasons.  Don't get me wrong - Fall is probably one of my favorite seasons.  But where I live we don't usu...